Repression And Intimidation In The Supreme Court 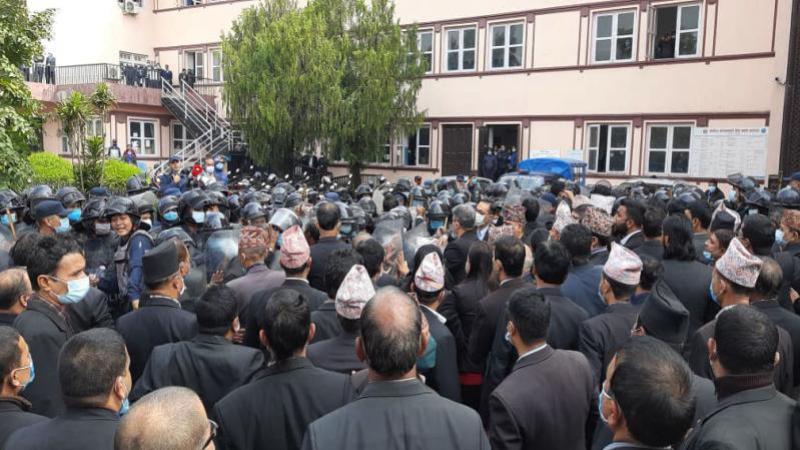 Nov 19, Kathmandu- In the Supreme Court on Thursday, senior advocate Savita Bhandari Baral saw a rare scene. She suffered police repression. Some were carrying SLRs used in war. At first glance, the temple of justice looked like a barracks.

Baral was ahead of other legal practitioners in the campaign to cleanse the court. She said, "At that time, the female police officer came and started harassing her. It looks like a sack that encloses with a drawstring. There are also minor injuries to the hand."

Chandeshwar Shrestha, president of the Nepal Bar Association, along with Baral, sustained minor injuries when police intervened in the peaceful protest. Central member of Nepal Bar Prakash Maharjan has sustained a head injury while trying to save Chairman Shrestha. He has been admitted to the hospital. Secretary of the Supreme Bar Association Rishi Ram Ghimire, advocates Kapil Chandra Pokhrel, Yuvraj Banjade, Nitesh Shrestha, Raman Lal Karna and member of the High Court Bar Patan Gopal Sapkotal were injured.

Attempts were made to harass the legal practitioners after the protest rally held at the Supreme Court premises. Some unidentified persons threatened the office premises of Nepal Bar. Eyewitness Baral told Annapurna Post, "It is not you who is wearing a black coat. They threatened to tear this black coat. A lawyer came hurdling. We were unarmed. They attacked, pointing to a nearby stone, and fled. The police have arrested him and taken him away."