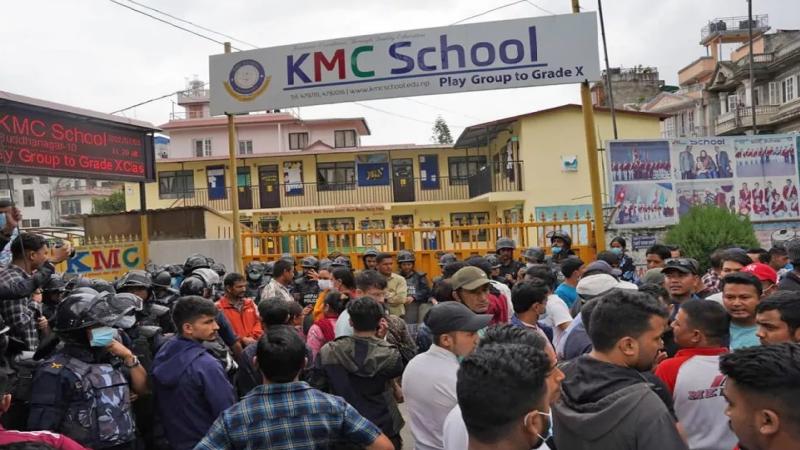 Jul 3, Kathmandu: The relatives did not understand the body of the girl hanging in the hostel of the KMC school. An employee of the hostel of KMC School in Buddhanagar of Kathmandu has been found dead.

Her body which has been working in the hostel for about a year and a half since the lockdown has not been recovered yet. She had a room in a house 200 meters away from the school. Her relatives suspect she was murdered.

Family members and relatives of the deceased have reached more than 100 places. They said that the police were trying to hold discussions with the family to take the investigation process forward. According to the uncle of the deceased Shyam Khatri said the police have not been able to hold talks. He said there was a demand for an impartial investigation into the murder.

"It simply came to our notice then. The administration has also barred us from entering, 'according he said.' Nothing has been decided yet. He has not been called for talks. The family of the deceased has demanded to include media persons in the negotiating team. "We have said that media personnel should be included in the negotiating team. We also formed a team but only talked to you, not to the media, 'he said,' so things have not happened. '

According to him, if there was no fault of the school in this incident, a comfortable environment should have been created by keeping media. He said that all the vehicles around the incident site were removed even after finding out about the incident at night. He said that there were more doubts due to that.

He also said that after the bodies were found last night, the administration called the parents of the students living in the hostel and sent them home. Mama Khatri said that the school did not inform the family even after learning about the incident. "After the incident, they called all the students of the hostel here as parents and sent them away.

Until then we had no information. Later, we found out why our nanny was hanging out only when we went to find out why she didn't come. He only informed the police administration and protected the school. The victim side did not create any basis to get justice, 'he said,' so we did not use the corpse. We are not even allowed to run it. '

He added, "We found out about the incident only after we arrived. When asked why the information was not given, they said that they were scared. 'A team including DSP Mim Bahadur Lama of Baneshwor Police Circle has been deployed at the spot.

A team including forensic doctor Gopal Chaudhary was deployed from the TU Teaching Hospital after the body was found last night. He returned after seeing the body but could not proceed with further investigation.