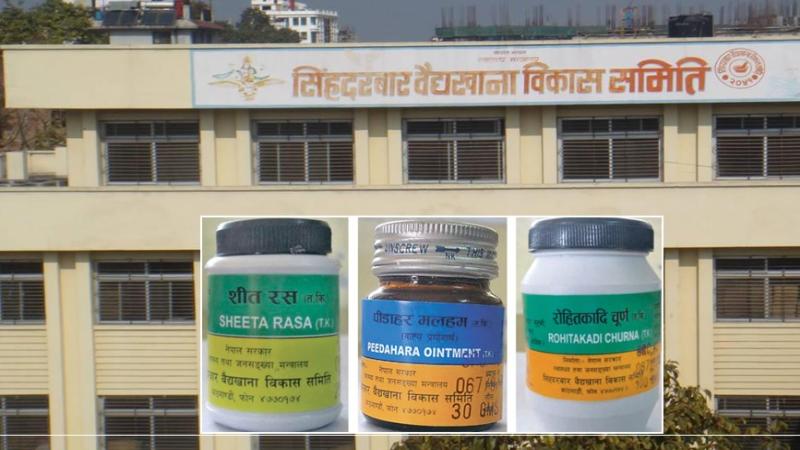 Jul 4, Kathmandu:  The Singha Durbar Vaidyakhana Development Committee which has been stalling production for the past four months has started making triphala. It had been seven months since the sale of Triphala powder made from Harro, Barro, and Amla which can be used in many diseases.

The development committee, which was set up to produce and sell quality Ayurvedic medicines, had stopped production of all other medicines for four months. About 50 employees used to come to the office daily and return after the strike.

Former executive director Dr. Sabri Sah, on the other hand, had been protesting against the appointment of salaried employees while there was no work on the committee. he claimed that many employees were needed after the start of production and that they were paid even when there was no work.

The employees of the committee had not been paid for four months due to non-production and sale. Acting Executive Director Yadav has sent four months' salary to the bank account of the employees within a week of their appearance. Employees living in the capital were in trouble after not receiving their salaries. Employees had been protesting in the office of the acting director for one hour daily saying that the management had not worked to solve the problem.

Not for six months

Aditya Thakur who works in the salesroom of the committee, says that the stone has been laid for six months. Every day 25 people come to the sales hall to get the stone. It's been four months since the gastric ulcer was removed. The committee has been returning those who come to seek medicine empty-handed. Even after months of running out of such drugs, the committee management has not paid attention to creating a production environment.

"When there was medicine, there was no time to pay the bills and check the patients. Now we have to spend time shaking without work. We don't even have time to get a salary due to lack of production and sale," he said. Shilajit's tender was held in the committee between 2009 AD and 2013 AD when Dr. Santosh Thakur was the executive director. Since then, there has been a shortage of tenders. At that time, Rs. 10 million was brought. Recently, a tender has been issued to bring three thousand kilograms of stone.

Demand for this specialty has grown significantly as a result of the Corona epidemic last year. In order to fulfill the demand, the committee formed Chyawanpras on November 16, 2021 AD. Now, the committee has sold the same Chyawan Prasad. The general public and wholesalers who go to the committee to buy medicine are now forced to return empty-handed as the manufacturing process has not started after other products started emptying in the warehouses. In the past, it was difficult to sell medicine worth Rs one lakh.

While working as per the constitutional order of 1994 AD, no problem was seen in the committee. In 2018 AD, the Council of Ministers decided to dissolve all the committees formed under the Development Committee Act. At that time, the Singha Durbar Vaidyakhana Development Committee was dissolved. The problem has arisen due to the lack of provision in the constitution order issued in 2021 AD after a long debate.

The constitution order provides for the appointment of an 11th-level executive director, but the chairman of the committee did not agree to the 11th-level executive director when the 10th-level staff of the Ministry of Health was appointed. The arrangement of having ex-officio members of the National Planning Commission and Deputy Secretary of the Ministry of Finance in the committee has been removed. Due to this, it is difficult to work in the absence of the representatives of the concerned bodies.

The problem started to arise even after private-level Ayurvedic medicine producers and clinic operators were included in the committee. Employees have complained that the work of the office is affected when a person with the conflict of interest is made a member of the committee.

There is a commotion among the 10 million missing employees of Bank of Kathmandu Lumbini in the name of the committee. The management has not responded to the request for information about the whereabouts of the money deposited in the bank's term deposit account.

An employee has complained that Rs. 10 million, which was supposed to be kept in the leave fund, has been transferred to NIC Asia Bank and disappeared. Dr. Sah, the former acting executive director of the committee, says that he did not know about the Rs. 10 million incident as it happened before his arrival.

Demand for this specialty has grown significantly as a result of recent corporate scandals involving Ayurvedic medicine. Campaigner Kamal Bahadur Rajalwat, who is involved in the promotion of herbs including Gurjo, is worried about the decline in the need to promote a medicine for the protection of plants with Ayurvedic properties.

Although there are many medicinal herbs and plants in the Nepali forests in the foothills of the Himalayas, they have not been put to good use. Campaigner Rajalwat has complained that some herbs and plants have been smuggled out and modern medicines made by mixing chemicals in them have entered Nepal.

Ayurveda doctor says that emphasis should be laid on research to promote Ayurveda hospitals and dispensaries. Campaigners say that the attention of the governing body should be drawn as the committee producing Ayurveda medicine is continuously declining.

During the second wave of corona at the National Ayurveda Research and Training Center, Kirtipur, in 2078 BS, 65 corona were infected and given Ayurvedic medicine. In the first phase of the Corona epidemic in 2077 BS, hundreds of Corona patients were kept in the center and sent for treatment with Ayurvedic medicine. As it is a hospital, training and research center, research was also done on the medicines given. Dr. Ram Adhar Yadav, Executive Director of the Center, said that the research conducted by the Center on the basis of limited resources has benefited the people of Nepal.

During the Corona period, Corona patients who came to the center were regularly fed tablets of Ayurvedic herbs including Gurjo, Sutho, Chili, Pipla, Asbestos. Some were even given oxygen. Executive Director Dr. Yadav informed that the patients of Corona who were admitted to the center during Corona period did not die.

The demand for Ayurvedic medicine to increase immunity has been increasing in the market since the Corona period. During the Corona period, the demand for Gurjo tea, Tulsi tea, Shilajit, Chyawanpras, Ashwagandha oil and non-harmful powder produced by the Singha Durbar Vaidyakhana Development Committee had increased. Campaigners have expressed concern over the failure of the concerned bodies to pay attention to the committee, which was supposed to produce Ayurvedic medicines during the health calamity.