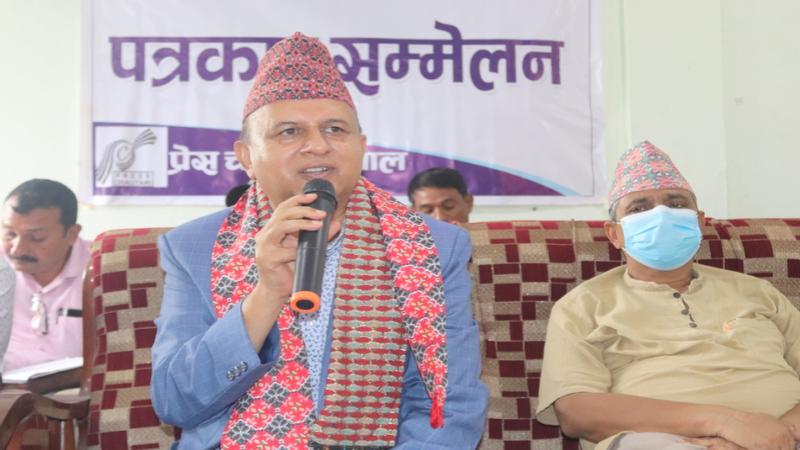 He said this while speaking at a press conference organized by the Press Chautari Nepal Dang branch in Tulsipur of Dang on Wednesday. He said that the KP Sharma Oli-led government had brought the Biplava Party into mainstream politics and made it clear that it is not appropriate to impose unfair cases on them. He also said that it is not appropriate to prosecute cases based on past incidents.

He said, 'It is not appropriate to file a full case after coming to open politics after coming to a peaceful process. However, even in open politics, if they do illegal things, they should be punished. Similarly, General Secretary Pokharel accused the current 5-party coalition government of pushing the country towards crisis instead of moving the country forward in one year.

He also alleged that the government has failed completely and that corruption and high cost have crossed the limit. He said that after the formation of this coalition government, questions of national interest have become weak and the people's desire for development and prosperity has been hindered.

He also pointed out that the economic situation of the country has deteriorated and Nepal is in danger of becoming a playground for foreign power centers. He also said that the current government is confused in setting the date of Chuwan which should be in November and that the government is not moving forward in smoothing the democratic process.

Similarly, he claimed that even though the results of the CPN-UML in the local level elections were not as expected, they have increased their strength exceptionally.

He also mentioned that people like Madhav Nepal, Jhalnath Khanal, and Bamdev Gautam left the party without any impact. He said, 'When those people left the party, the public opinion of the party did not decrease, it increased. When we were the first party, we got 33 percent of the votes. Now we have got 34 percent votes. Our party has been established as the most popular party in Nepal.

He said that Nepali Congress was seen as the first party according to the size of the local level elections and that was the result of the alliance. He also mentioned that it was not the result of his power in Congress.

He also alleged irresponsible activities of using unauthorized persons to manipulate revenue rates. He accused the current government of giving immunity to those who commit crimes on the basis of the majority. He said, 'In the eyes of Prachanda and Deuba, Janardan ji will be chosen. However, in the eyes of the public, he has committed a serious crime.