What Will Happen If President Does Not Respected Constitution? 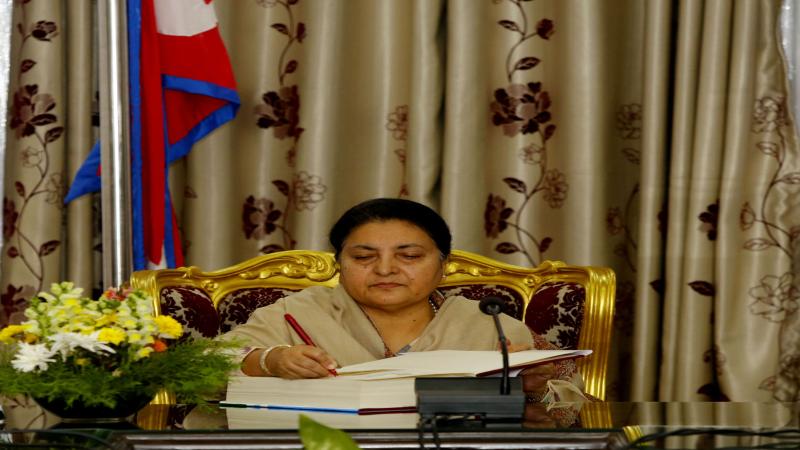 President Bidyadevi Bhandari, on the other hand, has gone astray from her main duties as prescribed by the constitution and has tarnished the dignity and dignity of the presidency. There is a constitutional provision that the President can send any bill passed by the Sovereign Parliament back to the Parliament for reconsideration.

But after the Parliament sends the bill back to the President, he has to certify it within 15 days. He had no choice. It was his constitutional duty to verify that. Some lawyers have argued that since the term of Parliament is over, the Citizenship Bill will automatically become inactive and the President will not have to validate it. That is not correct. The constitution has made a clear provision as to when the bill in the parliament becomes inactive.

President's move has raised serious questions about the Constitution and the system these days. Can a person who does not follow the constitution remain in the presidency or not? If we believe that it is possible, it will also be a good example for the president who will come tomorrow. What will happen if the president of tomorrow does not accept any decision made by the Parliament or the Council of Ministers?

Then we reach a situation where the parliament passes the law but the president approves it or not, the cabinet decides but the president will accept it or not. In other words, we will reach a situation where the sovereign power of the people will be exercised by the President, not by the Parliament and the Council of Ministers with a majority in the Parliament.

This will mess up our system to never install. It will plague every Prime Minister elected tomorrow. The parliamentary system will suffer. Tomorrow all the parties will fall into this dilemma. Therefore, a systematic and long-term remedy to the arbitrariness shown by the President is necessary.

After a long hearing, the Supreme Court issued a mandate to appoint Deuba as the Prime Minister and take oath within 24 hours. If someone knocks on the Supreme Court's door demanding that the President fulfill his constitutional obligations, the Court will certainly look into the matter. The Court has already made it clear that the actions of the President may be subject to judicial review.

The order of the court said, 'In the constitutional system and the rule of law, which has adopted democratic values, no official of the state can be above the law or outside the scope of the law. Everyone has equal devotion to the law and the law is supreme.' The court also reminded that the president will not be prosecuted in any court for the actions he has taken in his official capacity.

'In such matters, the President should not be held personally accountable. It cannot be considered as imposing any limitation or restrictions on judicially testing the legality of questions raised regarding the use or observance of the Constitution by an official or institutional body. The actions of the president must be in accordance with the constitution and the law,'' the court ordered.

The judgment pointed out that if the president's actions are not reviewed by the court, he may become autocratic. It is stated in the verdict, 'If any decision of that type is considered beyond the scope of judicial review based on the decision made by the President, it will result in arbitrariness and despotism.'

This example also clearly shows that the court will look at the matter of the president being absolved of his responsibility by not certifying the bill. The bill passed by the parliament is not voluntary, and it is necessary to show the president the limits of the constitution, and later remind future presidents of that limit.