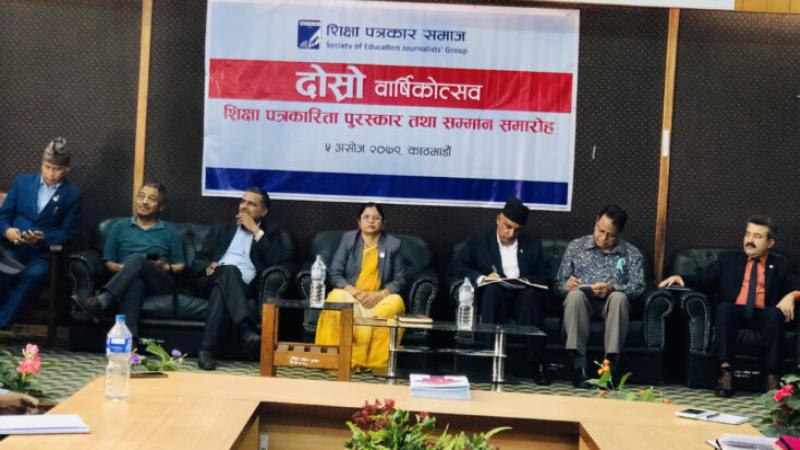 Sep 21, Kathamandu: State Minister of Education, Science and Technology Bodhamayakumari Yadav has said that schools are places of learning and has requested not to make them a political arena. He asked not to create a political arena saying that the continuous politics in the education sector will not have a positive effect.

Addressing the program organized on the second anniversary of the Society of Education Journalists, he said that whether it is teacher politics at the school education level or student politics at the university level, it has not had a positive effect, and urged them not to do politics in educational institutions. He said, "The religion of students and teachers should only be learning and teaching."

He clarified that since educational institutions are sacred temples opened for children to study, lock-downs and disruptions and politics are undesirable in universities or schools. In addition, he expressed his hope for the cooperation of all parties for the implementation of the "Education's Thought Paper 2022" which includes long-term reforms and goals in the education sector.

In the program, Ministry of Education the spokesperson Deepak Sharma said that the government's recently published education thinking paper includes the overall aspect of education development and it is a living document. He expressed his belief that there will be no reduction in the flow of educational information provided by the Ministry and said that there may be problems at times as the information has to be given through a process.

In the program, various educators dedicated to the improvement of public education were honored. In this process, Pawan Mandal, principal of Janata Mavi of Dhanusha, Kumarikamala Rai, principal of Janakalyan Mavi of Kathmandu, Gopal Shrestha, president of biswaniketan Mavi's management committee, and Bhanubhakta Mainali, principal of Janjyoti Mavi of Kavre, were honored. Similarly, the Education Journalism Award of Rs 25,000 established by the society has been given to Annapurna Post journalist Tara Chapagain.