Direct Counting of HoR Has Reached In Final Stage! 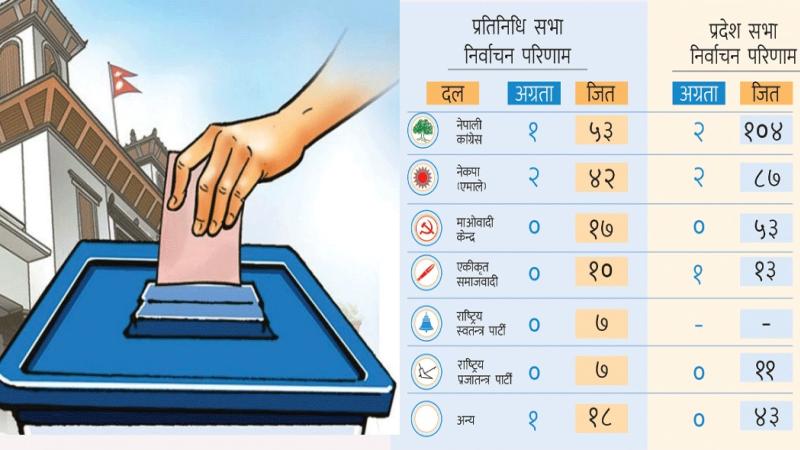 Nov 28, Kathmandu:  The result of the direct counting of votes in the House of Representatives(HoR) has reached the final stage. The results of six seats are yet to come till Monday evening.

According to the latest results, Jhalnath Khanal, former Prime Minister and respected leader of CPN (Unified Socialist), has been defeated in the House of Representatives elections. He is the only former Prime Minister to be defeated. He was defeated by CPN (UML) Elam President Mahesh Basnet by a margin of 2,957 votes. Basnet got 25 thousand 699 votes while Khanal got only 23 thousand 45 votes. Khanal was the common candidate of the alliance.

According to Pashupatinagar journalist Prem Prasad Adhikari, the election results are yet to be officially announced by the election officer's office. The result is mentioned in the final published list of counted votes. It is mentioned in the notice issued by the office that the official announcement will be made only on Monday after the counting of proportional votes.

Due to the defeat of Khanal, the trip to Parliament for the seventh time has been stopped, while Basnet has got the opportunity to start the trip to Parliament for the first time. Khanal was elected from UML in the past. He became the Prime Minister for 204 days in the year 2068. Khanal held a press conference on Saturday saying that the election was rigged and rejected all the election procedures. Basnet was elected mayor of the Maylam municipality in 1994 and 2017 AD.

Similarly, according to the source, Mahesh Kumar Das, Mahottari Constituency No. UML candidate Lakshmi Mahato has won 1 member of the HoR. Mahato won by a margin of 1,030 votes. Mahato got 23 thousand 402 votes and his nearest competitor Girirajmani Pokharel of CPN (Maoist Centre) got 22 thousand 372 votes.

Similarly, according to a source, the Democratic Left Alliance candidate won in Ramechhap. Poorna Bahadur Tamang (Kancharam) of the Nepali Congress has won in Ramechhap, a constituency. Tamang defeated UML's Kailash Prasad Dhungel by a margin of 16,369 votes. Tamang got 47 thousand 98 votes and Dhungel got 30 thousand 729 votes.

According to the source, Bara area no. Janata Samajwadi Party (JSP) candidate Ram Sahay Prasad Yadav won by getting 13,822 votes. He defeated Shiv Chandra Prasad Kushwaha of the Maoist Center by a margin of 354 votes. Kushwaha got 13,468 votes. Similarly, according to a source, Deepak Karki, who was a candidate from the UML-JSP alliance in Dhanusha-1 has been elected. Karki of Jaspa has defeated former minister Matrik Prasad Yadav, the candidate of the Maoist Center. There is a difference of 5,948 votes between them.

Karki got 27 thousand 431 votes while Yadav got 21 thousand 431 votes. He was defeated by Karki Yadav in the 2017 AD election. According to sources,  the candidate of the Nepali Congress, Minister of Communication and Information Technology Gyanendra Bahadur Karki, registered an application at the election officer's office for a recount.

After the counting of votes here was postponed from Saturday afternoon, even though two all-party meetings were held regarding resuming the work of counting votes, the counting could not be started because no agreement could be reached. An all-party meeting was held twice on Saturday evening and Sunday morning to noon at Bhagwati Secondary School located in Inaruwa, the headquarters.